The project "meinGrün - Information and navigation to urban green spaces in cities" comes to an end with a final workshop and a public presentation. The central result is the meinGrün app, with which users in the pilot cities of Dresden and Heidelberg can rediscover known and unknown green spaces and how to get there. The project team has also created important conditions for the meinGrün infrastructure to be used in other cities in Germany and internationally. The project was funded by the Federal Ministry of Transport and Digital Infrastructure (BMVI) as part of the mFUND innovation initiative with around 1.4 million euros.

Since November 2018, the meinGrün project partners from science and practice have experimentally developed novel technical infrastructures and also tested how open data can be integrated and used for daily life. The result is the meinGrün app for the pilot cities of Dresden and Heidelberg. It helps users to quickly and easily find the green space that best suits their needs - for example, for jogging in a quiet environment, visiting the playground or having a family picnic. The app also provides information on the equipment of the green spaces. It also includes a routing function. Users can choose the fastest, quietest, greenest or shadiest route to the selected green space on foot or by bike.

The meinGrün app was developed on the basis of a transdisciplinary research approach: both citizens and the city administrations of the two pilot cities were involved in its development. Potential users were asked about their favourite activities in urban green spaces and how the green spaces should ideally be equipped for them. Citizens and city administrations also helped test the app. Based on their feedback, the project team was able to further develop the content of the meinGrün app and optimise its functionalities.

In addition to the meinGrün app, other components and services were developed as part of the meinGrün infrastructure. They can also be used separately from the app. For example, the meinGrün web portal serves as a showcase for the city administrations in Dresden and Heidelberg, but also for other interested parties. The web portal visualises the data generated with meinGrün, shows practical application examples and makes the information available for download. The online tool “baumcloud” (baumcloud.org) was also developed as part of meinGrün. With this tool, open municipal tree registers with different data formats and structures can be merged and harmonised. After this harmonisation, the data can be better used for comparative analyses or for integration into web applications, for example.

The project team presented all developments to the public at a final workshop. In addition, the project results were also presented at the Dresden Land Use Symposium (DFNS2021) and discussed with participants from science and practice. Further potentials of the app functionalities were discussed and the novel approaches to data processing used in the project were explained in more detail.

The meinGrün app and the meinGrün web portal will remain freely accessible for at least three more years after the end of the project. Through the predominant use of freely available data, the meinGrün infrastructure can be transferred to other cities, both nationally and internationally. In addition, the meinGrün app will be part of courses and used as a research tool in the field of citizen science research in Dresden and Heidelberg.

Background
The meinGrün project was funded by the Federal Ministry of Transport and Digital Infrastructure (BMVI) as part of the mFUND innovation initiative. The project volume totalled 1,720,054 euros (of which 83 % was funded by the BMVI).

About the BMVI's mFUND: As part of the mFUND innovation initiative, the BMVI has been funding data-based research and development projects for digital and networked mobility 4.0 since 2016. Project funding is supplemented by active professional networking between stakeholders from politics, business, administration and research and by making open data available on the mCLOUD portal. Further information can be found at www.mfund.de 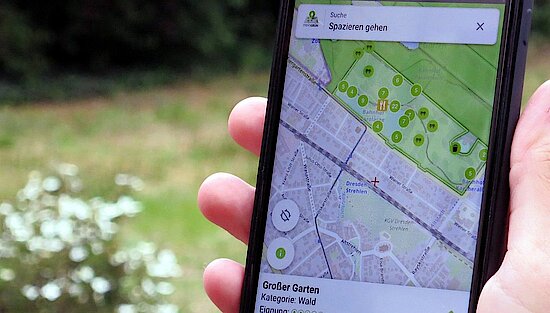 This measure is co-financed by tax funds on the basis of the budget approved by the Saxon State Parliament.