What consequences does structural change have for the spatial development of Lusatia and how can the process be designed to be as future-oriented as possible? The planning lab "Spatial Images Lusatia 2050" has been working on this question since March of this year. Four interdisciplinary teams are designing spatial visions for a more sustainable development of the region. At an interim colloquium in mid-July at the TELUX socio-cultural centre in Weißwasser, the teams presented their initial results and discussed them with experts in spatial development. The exchange provided important ideas for the second phase of the project. The teams will present their final results at a colloquium on 16 September.

The interim colloquium for the planning lab "Spatial Images Lusatia 2050 - Designing Sustainable Transformation" focused on critical reflection and discussion of the first drafts. In addition to regional experts from science and practice, experts of spatial development such as Dr. Markus Eltges, Director of the Federal Institute for Research on Building, Urban Affairs and Spatial Development (BBSR), and Prof. Rainer Danielzyk, Secretary General of the Academy for Territorial Development in the Leibniz Association (ARL), were available to advise the four participating teams.

After the launch of the planning lab in March and a two-day excursion through Lusatia in April, the interim colloquium in mid-July concluded the first processing phase. The focus was on the spatial visions that the four teams had created over the past weeks and months. They were discussed for one day in a workshop. The draft visions show spatial visions and spatial images for a sustainable transformation of the region, which spatially anchor cross-thematic project approaches in structural change, depict networks and interactions and thus create scenarios for new ways of living. There is a great variety of ideas, approaches as well as thematic foci and the topics of the spatial visions are not only composed of regional mobility and economic drivers. Topics such as commons and grassroots initiatives, landscape potentials, water scarcity and the role of knowledge and research also came into focus.

The interim colloquium was an important milestone that served as an intensive exchange and critique of the strategies, approaches and plans. The discussions shed light on possible synergies and points of conflict for regional development and provided important suggestions for further work by the teams. The final spatial images are expected to be presented at a final event on 16 September in Cottbus.

Background
The planning lab "Spatial Images Lusatia 2050 - Designing Sustainable Transformation" is part of the project "Scientific Support and Accompaniment of the Transformation in Lusatia", which is funded by the Federal Ministry of Education and Research (BMBF). The project develops proposals for the design of a successful structural change in the region on a scientific basis. It is being implemented in the Interdisciplinary Centre for Transformative Urban Regeneration (IZS) in Görlitz, which is run by the Leibniz Institute of Ecological Urban and Regional Development (IOER) together with the International Institute (IHI) Zittau of the Technische Universität Dresden. The IOER/IZS is supported in the implementation of the planning laboratory by "KARO*architekten Kommunikation I Architektur I Raumordnung" from Leipzig.
Further information on the project 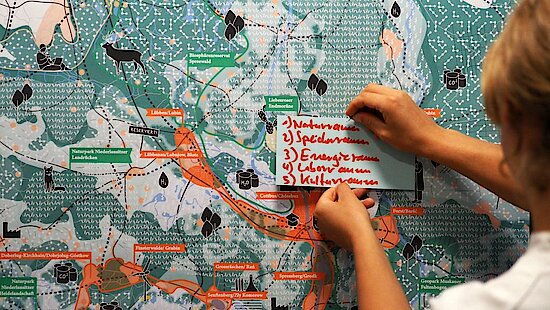