Since autumn 2017, an interdisciplinary team of researchers and practice partners has been investigating how urban districts and buildings can be better adapted to summer heat in the project "HeatResilientCity". The Federal Ministry of Education and Research (BMBF) is now funding the project for another two years. Phase II will focus on the practical implementation of adaptation measures. The project also focuses on the issue of health.

Advise, qualify, implement - this is the focus of the project "HeatResilientCity II". The aim is to familiarise many practitioners with the topic of heat adaptation in urban districts, to form new networks and to jointly develop suitable tools for decision-making in urban and open space planning, but also for the individual actions of citizens.

The project consortium continues to include the Leibniz Institute of Ecological Urban and Regional Development, which is coordinating the project, the Technische Universität Dresden, the Dresden University of Applied Sciences, the Institute for Urban Research, Planning and Communication at the University of Applied Sciences Erfurt, and the City of Dresden as well as the City of Erfurt. New to the project team is the Office of Health and Prevention of the City of Dresden. The Health Department of the City of Erfurt and the reantal companies "Eisenbahner-Wohnungsbaugenossenschaft" Dresden and “Wohnungsbaugenossenschaft Zukunft” Erfurt will also be involved in the project.

The knowledge gained in phase I of the project from October 2017 to January 2021 about adapting to summer heat in city districts and individual buildings will be disseminated in a targeted manner in phase II. Information and qualification offers are planned for employees in municipal administrations, but also for professional associations, city parliaments, building owners and administrations as well as the general population. Together with the city administrations of Dresden and Erfurt, the obstacles that need to be overcome in order to transfer the topic of prevention and heat adaptation into municipal action and to achieve better cooperation across administrative boundaries will be examined in detail. The administrations will also support the scientific partner institutions in developing digital data offers, instruments and planning tools. In the future, these should make it easier to identify urban areas with urgent need for action and to assess and evaluate the effectiveness of various measures.

In the continuation of the project, the topic of health is to be highlighted more strongly than before. Long periods of heat in summer are already having a negative impact on the well-being and health of large parts of the population in many places. Among other things, a health network "Heat Prevention" will be created and important information for multipliers will be compiled in a handbook.

The research from the first project phase will be continued and deepened in "HeatResilientCity II". For example, it will be examined how findings from the studied city districts in Dresden and Erfurt can be transferred to other climate regions and city structures in Germany. Likewise, already tested analysis methods that can be used to assess the effects of summer heat on buildings are to be applied to other building types. This will make it possible to compare the heat load of different building typologies. The influence of different adaptation measures in the open space on the heat load in the building will also be analysed in the project.

Contact at the Leibniz Institute of Ecological Urban and Regional Development

The project "HeatResilientCity II" (Heat adaptation of urban building and settlement structure types - actor-oriented implementation support to strengthen climate resilience and preventive health care) is funded by the Federal Ministry of Education and Research (BMBF) as a project of the "Leading Initiative City of the Future " in the thematic area "Climate resilience through action in cities and regions". The project will receive a total of around 1.5 million euros for the period from February 2021 to January 2023. Scientific partner institutions are the Leibniz Institute of Ecological Urban and Regional Development (lead), the Institute for Urban Research, Planning and Communication at the University of Applied Sciences Erfurt (ISP), the Chair of Meteorology at the Technische Universität Dresden and the University of Applied Sciences Dresden (HTW), professorship Building Physics/Climate Control and Air Conditioning and professorship Building Construction. Practical partners are the City of Dresden, Environmental Office and Office for Health and Prevention, and the City of Erfurt, Environmental and Nature Conservation Office. Associated partners are the Health Department of the City of Erfurt as well as the "Eisenbahner-Wohnungsbaugenossenschaft eG" in Dresden and the "Wohnungsbaugenossenschaft Zukunft eG" in Erfurt. A broad alliance of other partners supports the project: these are the Chamber of Architects of Saxony and Thuringia, the Thuringian Energy and Greentech Agency (THEGA), the Thuringian Chamber of Engineers, the AGETHUR State Association for Health Promotion in Thuringia, the Saxon State Association for Health Promotion (SLfG), the Healthy Cities Network Germany, the State Seniors' Representation for Saxony e. V. (LSVfS) and the Saxon State Chamber of Pharmacists (SLAK). 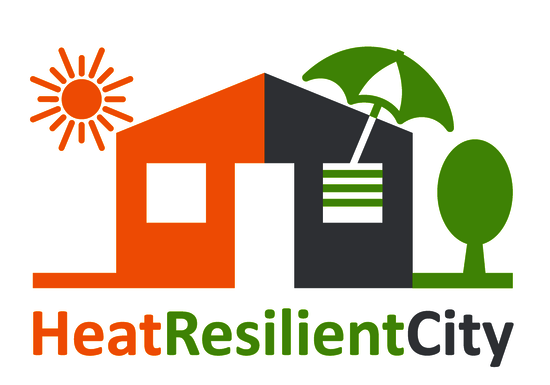